A conference organised on behalf of the CEA to explain the different 3D formats on the market has been hailed as a huge success. 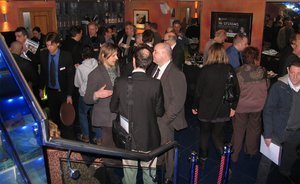 The event, called 3D Systems, Explained and Demonstrated, was held at the Apollo Piccadilly Circus on 23 February. Delivered by Anthony Williams Consulting, it was attended by almost 170 people, with a reserve list running to over 30 places.

Mindful of the renewed interest in 3D generated by the unprecedented success of Avatar, the event was intended as a way of providing a neutral platform to present the current 3D systems on the market, allowing cinema operators to informed choices about which 3D system would best suit particular situations.

During the course of the day, those present heard a range of independent industry experts give presentations on systems from Dolby 3D, Masterimage, RealD, Technicolor 3D and XpanD and there was an opportunity to see some of these in action. Following the presentations, cinema owners with experience of the different systems gave personal accounts of installing and operating the systems.  To round the day off, an expert panel took questions from the audience.

In light of the success of the 3D conference, the CEA is now considering hosting further focussed events for cinema operators.

Commenting on the day, Andrew Poole, General Manager of Pavilion Cinema Galashiels and one of the speakers, said:

“The CEA 3D Systems, Explained and Demonstrated event was a great source of information for us.  Although we have one 3D screen at the moment, the demonstrations of other 3D systems and being able to chat with other exhibitors will help us in making decisions on what systems may be best for our business as Digital Cinema and 3D grows over the coming year or so. In simple terms, one 3D screen is good, but clearly two 3D screens is not only better, but essential.”