The CEA today joined colleagues from the Federation Against Copyright Theft (FACT) and the Film Distributors’ Association (FDA) at a ceremony to reward cinema staff who had played a key role in preventing attempts to record films in cinema theatres. 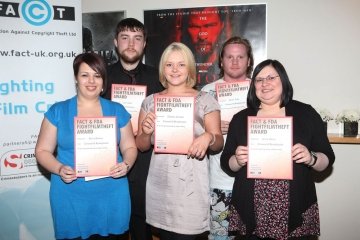 At an event hosted by Paramount Pictures, eleven staff members from cinemas across the UK were presented with awards totalling £2,900 for their efforts in preventing illegal recordings.

The rewards are part of a training, prevention and reward scheme operated by FACT and funded by the FDA for all UK cinemas.

Illegal recordings of films made in cinemas remain the primary source for illicit copies worldwide – recordings which are then uploaded to the Internet and made available within hours to millions of people.

FACT works closely with cinema operators to ensure that staff are trained to detect and prevent such recordings, as well as assisting in raising awareness with police on this issue so they are able to assist when called to an incident.

Those rewarded today were responsible for preventing nine separate attempts to record films in cinema theatres. Awards were made to:

In many cases those rewards were matched by a similar amount from their employing company.

More details on the FDA-funded reward scheme can be found at www.fightfilmtheft.org.uk