11 cinema staff from across the UK today received rewards totalling £7,000 for preventing films being recorded at their sites.

Part of the training, prevention and rewards scheme operated by the Federation Against Copyright Theft (FACT) and funded by the Film Distributors’ Association (FDA), the rewards were handed out at a special ceremony in central London to the following cinema staff: 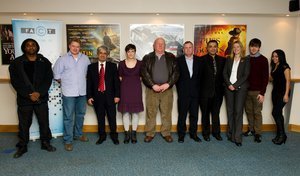 Illegal recordings of films in cinemas are the primary source for counterfeit copies worldwide, such recordings being uploaded to the Internet and made available within hours to millions of people. Film theft costs the UK industry over half a billion pounds a year and directly threatens the jobs of tens of thousands of people who work across the film sector.

FACT works closely with cinema operators to ensure that staff are trained to detect and prevent such recordings, as well as assisting in raising awareness with police on this issue so they are able to assist when called to an incident.

Kieron Sharp, FACT Director General, said that no-one should be in any doubt about the increasing sophistication of those trying to record films, and the increasing difficulty that detecting them presented to cinema staff. The success of those present was therefore particularly worth celebrating, he said, adding:

“These rewards prove the ongoing commitment from everyone working in the film sector to combat piracy. A recording captured in a cinema is the primary source for illicit online files and pirate DVDs and cinema staff are on the front line of the fight; continuing to prevent such recordings in the UK. I am delighted to be able to acknowledge and reward their achievements.”

More information on the work of FACT can be found at the FACT website.