Cash rewards of thousands of pounds have been presented to 13 staff members from cinemas across the UK who intervened successfully to prevent illegal recordings of films including Skyfall, Ted, The Dark Knight Rises and The Hobbit. 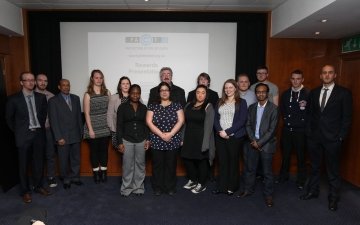 The 13 vigilant staff members were involved active in 12 separate incidents in UK cinemas during the autumn/winter season, six of which involved attempts to record Skyfall from the screen. All 12 incidents were reported to local police, resulting in two arrests.

The rewards scheme is part of a wide-ranging theatrical protection programme, funded by UK film distributors via Film Distributors’ Association since 2006. It also provides vital extra resources for the Federation Against Copyright Theft (FACT) to support cinema exhibitors’ staff training; an on-going supply of night vision devices to help cinema staff deter recording attempts in situ; and an education campaign including school resources on copyright.

The impact of this programme may be measured by the fact that no pirated recordings were sourced to a UK cinema release in 2012. Yet worldwide, illegal recordings from cinemas remain the single biggest source of both counterfeit DVDs and unauthorised copies online.

“The success of a film such as Skyfall is due to all those who worked on it and whose jobs depend on there being continued investment in new films. On behalf of all the cast and crew we are delighted with the outstanding efforts made by cinema staff in tackling the criminal activity of recording films illegally.”

“Cinema staff are the frontline in protecting films from being pirated and I am always pleased to be able to recognise their work. FACT’s strategy funded by the film distributors seeks to prevent pirate copies being made, distributed and accessed and that is why we continue to work together with UK cinema operators to ensure recordings do not get made and to support the success of the cinema experience.”

Amongst those who received awards at a ceremony in central London were: