David Williams, one of the most prominent and successful UK independent cinema operators, has recently visited Buckingham Palace to receive an MBE from HM the Queen. 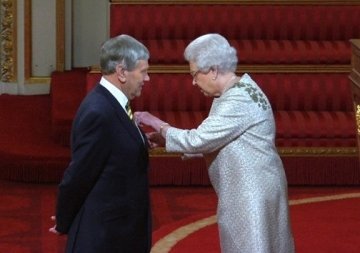 David Williams receives his MBE from HM the Queen.

The award, announced in the 2013 New Years Honours list, recognises a lifetime of selfless dedication to promoting cinema-going in Central and Eastern Cornwall.

David joined his family’s business, The Capitol, St Austell. as a trainee projectionist in 1966 straight from school, before becoming a director and then managing director of the company through the 1970s.

At the time of his first involvement with the family business, the company operated cinemas in St Austell and Padstow, with The Regal in Wadebridge added soon afterwards. On being appointed managing director, the company acquired the Classic cinema in St Austell and took the name of WTW Cinemas (a name which related to the family construction business, WT Williams, which had been involved in many Cornish building projects since 1878).

Under David’s guidance, the company embarked on a major redevelopment of that cinema at a time when many other similar sites were closing down due to the advent of video and home entertainment, creating Cornwall’s first triple screen cinema in April 1981, before becoming a five screen complex in May 1991.

In 1997, the company acquired the Plaza cinema in Truro, this having been previously closed for safety reasons. After a period of significant investment and refurbishment – amounting to David’s life savings and more – the transformed cinema opened in the summer of 1998, bringing the big screen back to Cornwall’s only city. The theatre was awarded a best UK independent cinema award in 2006.

At around the same time, initial discussions were underway into a widespread redevelopment of St Austell town centre, resulting in the eventual closure of the old cinema in August 2007 to be replaced by a new state of the art four screen complex – the new White River Cinema – which opened its doors for the first time in December 2008, winning another prize for best UK independent cinema in 2011. The opening of this cinema gave the company the unique honour of having operated 3 cinemas in the town.

David’s long-term aim of bringing cinema back to Newquay was realised when – following the purchase of the site in 2008 – the brand new four screen Lighthouse Cinema opened in the town in May 2011.

Through of this hard work, David has ensured that WTW Cinemas is now recognised as one of the longest-established cinema operators in the UK, priding itself on bringing the latest in cinema technology and comfort to Central and Eastern Cornwall.

Throughout his work career, David has brought huge personal and financial investment to bringing entertainment and happiness to his patrons.

In the last five years in particular, David has opened two new cinemas in the face of a difficult financial climate in communities experiencing particular economic challenges. He and his company have brought new employment opportunities to over 60 people, the majority of these being given to the younger age groups. Throughout his business life, commitments have been made to give chances to people and to develop their skills and knowledge, which has ensured great loyalty to the business.

In total WTW Cinemas now employ over 120 people in Central and Eastern Cornwall, making the business one of the larger locally-based independent employers in the region.

David has a wife, Angela, and two sons, Mark and Robert, who both work for the family business.

The CEA warmly congratulates David on this much-deserved honour.