The Industry Trust for IP Awareness,  in collaboration with Film Nation UK, has created a short film for young people to bring to life the importance of making positive choices when accessing film, TV and video.

The film is designed to tackle the issue of film piracy in an open and honest way, highlighting the craft and hard work that goes into creating films and TV therefore helping young people make the connection as to why content should be accessed legally and officially. The short film will play at Film Nation UK’s National Youth Film Festival which runs from 21st October to 8th November. 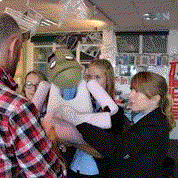 By bringing together the unique expertise and experience of Film Nation UK and the Industry Trust, the film aims to make a significant impact on young people’s attitudes and behaviour in relation to copyright infringement, and to inspire young people to make positive choices when accessing film, TV, and video by choosing official content. My Pockets worked with teenagers to capture real voices, involving them in the recording audio, making puppets, shooting the film and the edit to help them get under the skin of the various aspects that are involved in filmmaking.

Both the Industry Trust for IP Awareness and Film Nation are supported by Cinema First, the cross-industry body established to promote cinema-going, of which the CEA is a founder member.

FacebookTwitterLinkedInRedditTumblrPinterestVkEmail
Please note: prior to May 2015, the UK Cinema Association was known as The Cinema Exhibitors‘ Association (CEA).