Cash rewards were presented this week to 15 vigilant staff members from cinemas across the UK at a ceremony hosted at Universal Pictures.

Staff from across a range of companies – including Cineworld, Empire, Odeon and Vue – intervened successfully to prevent illegal recordings of films such as Gravity, Captain Phillips, Rush, One Direction: This Is Us, and Alan Partridge: Alpha Papa. 12 separate incidents where camcording activity in local cinemas was disrupted/detected since March 2013 were recognised. 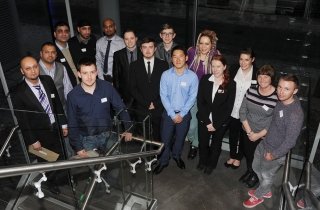 The rewards scheme is part of a wide-ranging theatrical protection programme, funded by UK film distributors via the Film Distributors’ Association (FDA) since 2006. It also provides vital extra resources for the Federation Against Copyright Theft (FACT) to support cinema exhibitors’ staff training and an on-going supply of night vision devices to help cinema staff deter recording attempts in situ.

Further details on the scheme – and more information on the fight against film theft – can be found at www.fightfilmtheft.org.uk.