UK Cinema Association joins in celebrations at Into Film Awards

UK Cinema Association joins in celebrations at Into Film Awards

The UK Cinema Association yesterday joined hundreds of children and young people from across the UK – as well as colleagues from across the industry – to celebrate the second annual Into Film Awards at London’s historic Odeon Leicester Square Cinema.

The Awards pay tribute to outstanding 5-19 year olds who have demonstrated exceptional achievements in film-making and film reviewing. At the event, Into Film, supported by the BFI Lottery funding and UK cinema industry funding through Cinema First, honoured the young filmmakers during a formal red carpet and awards ceremony attended by Into Film Ambassadors Michael Sheen (Frost/Nixon) and Naomie Harris (SPECTRE), alongside Peter Lord (Aardman Animations), Christine Langan (Head of BBC Films) and director Tom Hooper (The Danish Girl). 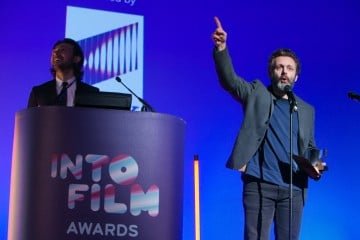 Commenting on the Awards, Barbara Broccoli OBE, Into Film Board Member, said:

“Creating films takes real passion, commitment and drive and I’m delighted the Into Film Awards acknowledge the hard work that these young people, the next generation of filmmakers, have put in over this last year.  Apart from being great fun, this day also offers nominees the chance to see their films on one of the biggest screens in the UK, the Odeon Leicester Square, as well as meeting established  actors, directors and producers; for some, it is the first time they’ve visited the capital. It’s also our chance to thank the teachers who run our film clubs and use film in the classroom. Into Film places film at the heart of learning, reaching a million young people each year through clubs, online content, filmmaking and training to support classroom teaching.”

“It’s been a real pleasure to be one of this year’s judges for the Into Film Awards. The films are of such high quality and it’s really exciting to see young people with so much talent receiving such fantastic support in their creative efforts. Everyone wins. A real success story all round.”

Cinema First – of which the UK Cinema Association is a core member – funds and supports the Into Film Festival, an annual programme of free cinema screenings which in 2015 attracted over 415,00 children and young people, parents and educators to over 510 cinemas nationwide.

A full version of the Into Film press notice can be found here.