Key players in the UK cinema sector featured strongly when the winners of the 2017 Screen Awards were announced this week. 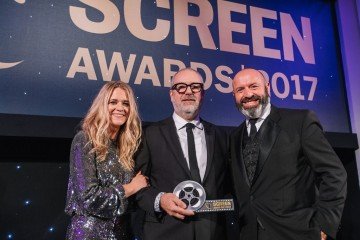 In the two ‘cinema of the year’ categories, the recently-refurbished VUE West End in London won the hotly-contested category for companies with 25 or more screens, while Zeffirelli’s Ambleside triumphed in the category for operators with 24 screens or fewer.  The Jam Jar Cinema in Whitley Bay was ‘highly commended’ in the same category.

Elsewhere Everyman Cinemas won out in the category for Cinema Marketing Campaign with its Everyman Music Film Festival.

The Awards ceremony, held in front of a packed industry audience at the Grange, St Paul’s in London on Thursday evening, also saw Steve Knibbs, COO of Vue International (pictured between Awards ceremony host Edith Bowman and UKCA Chief Executive Phil Clapp), give a heartfelt speech recalling and thanking colleagues from his career to date as he accepted an Exhibition Achievement Award, sponsored by the UK Cinema Association.

A full list of winners on the evening can be found here.