Cinema staff from across the UK were rewarded earlier this month for their vigilance in spotting and disrupting attempts to record a film in their cinema. 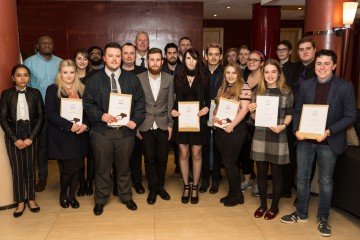 Receiving cash rewards of up to £500 as part of the Film Content Protection Agency’s theatrical protection scheme – funded by the Film Distributors’ Association –  over twenty cinema staff were recognised for their part in disrupting 19 film theft attempts between September 2017 and February 2018. Five of these incidents led to arrests and a further seven to formal police cautions.

Amongst the films protected were Kingsman: The Golden Circle and Star Wars: The Last Jedi, both produced extensively in the UK.

At a specially-convened ceremony in Central London, each staff member was awarded a special certificate as well as receiving their cash reward.

Commenting on the awards, Director of FCPA Simon Brown said:

“As there have been some significant and successful interventions in recent months, today’s event focuses on acknowledging the great work of these cinema staff members. We’ve also taken the opportunity to highlight the hugely engaging line-up of forthcoming releases and to ask for continued high levels of vigilance to help deter copyright theft and infringement.”