Last week saw cinema staff from across the country rewarded for their vigilance in helping to disrupt attempts to record films in UK cinema theatres.

Twenty staff members were handed their rewards at a presentation in Central London, hosted by the Film Content Protection Agency (FCPA), the organisation formed 2016 by Film Distributors’ Association (FDA) as a specialist unit dedicated to safeguarding theatrical releases in the UK and Ireland, 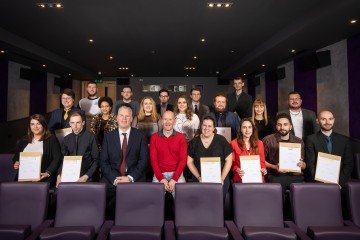 During the event FCPA welcomed their special guest, Team GB’s Winter Olympian Eddie “The Eagle” Edwards, who addressed the audience and presented the rewards. Eddie spoke at the event about the value of determined effort even when a goal seems well-nigh impossible to achieve.

A key task of the FCPA programme is to develop the awareness and vigilance of cinema staff UK-wide by providing them with anti-piracy training, current best practice guidelines and other resources. These include an online learning quiz at the FDA website which refreshes the detailed knowledge needed to identify and disrupt illegal recording activity.

Commenting on the ceremony, Simon Brown, Director of FCPA, said:

“There have been some significant and successful interventions in recent months, so today’s event focuses on formerly acknowledging the great work done by cinema staff across the UK for their vigilance and awareness. With a very attractive line-up of forthcoming releases over the Spring and beyond we ask for continued high levels of vigilance to help deter copyright theft and infringement.”