22 cinema staff from across the UK were rewarded last week by the Film Content Protection Agency for their contribution to the fight against film theft. 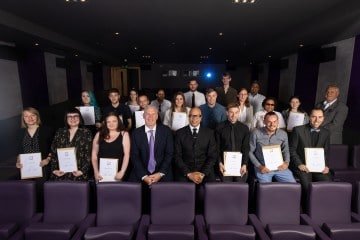 Recipients traveled from cinemas as far away as Edinburgh, Newcastle-Upon-Tyne and Plymouth, and included employees from Odeon, Cineworld, Vue, Showcase and Empire cinemas.

The Film Content Protection Agency (FCPA) was formed in 2016 by the Film Distributors’ Association as a specialist unit dedicated to safeguarding theatrical releases in the UK and Ireland.

Commenting on this latest round of rewards, FCPA Director Simon Brown said:

“There has been some further fantastic anti-piracy awareness and vigilance by staff in cinemas across the UK and Ireland in recent months, leading to significant and successful disruptions of the activity. Today’s event focusses on acknowledging the great work done by some of those staff. We also take the opportunity to highlight the very attractive line-up of forthcoming releases and ask for continued high levels of vigilance to help deter copyright theft and infringement.”

facebooktwitterlinkedinreddittumblrpinterestvkEmail
Please note: prior to May 2015, the UK Cinema Association was known as The Cinema Exhibitors‘ Association (CEA).