Cinema exhibition was again to the fore at this year’s Screen Awards event, held last night in Central London.

During an evening which saw Dame Judi Dench recognised for her Outstanding Contribution to UK Film, another undoubted highlight was the presentation of the Exhibition Achievement Award to Tony Jones, who is stepping down from the Cambridge Film Festival after a varied career in the industry spanning over four decades. 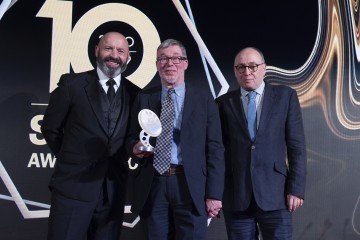 The audience heard a heart-felt tribute to Tony and his contribution to UK independent film from Mark Cosgrove, Director of Cinema at the Watershed Bristol, before he and UK Cinema Association Chief Executive Phil Clapp presented Tony with his award to a standing ovation from a packed room.

In accepting the honour, Tony spoke fondly of his time in the industry, and paid tribute to those who has supported or helped shape his career. In doing so, Tony offered particular thanks to his former business partner Lyn Goleby, with whom he founded the Picturehouse cinema circuit.

In the hotly-contested ‘cinema of the year’ categories, the Rio Dalston emerged victorious in the ‘smaller operator’ category, with a ‘highly commended’ going to the Campbeltown Picture House in Scotland. Congratulations to them and also to the other shortlisted sites:

(The Rio also won the ‘Cinema Marketing Campaign of the Year’ for their Young Audiences Initiative.)

In the ‘larger operator’ category, the award went to West Norwood Picturehouse, with Odeon Luxe Leicester Square picking up a ‘highly commended’. Again well done to them and the other short-listed sites:

A full list of winners on the evening can be found here.