Into Film Festival sees over 500,000 attendees for the first time

Into Film Festival sees over 500,000 attendees for the first time

This year’s Into Film Festival, the 2019 edition of the largest free cinema festival for children and young people in the World, saw the event pass over half a million attendees for the first time. 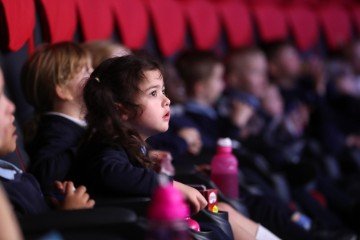 Launch of the Into Film Festival in Wales.

In total, 503,687 children, young people, teachers and parents attended over 3,000 screenings and events at 600 cinemas across the UK during the Festival, which ran from 6-22 November.

Supported with funding from the cross-industry body Cinema First, the event has gone from strength to strength in recent years, establishing strong relationships between schools and their local cinemas and providing many young people – estimated to be as many as 30,000 this time around – their very first taste of the big screen experience.Over 160,000 ‘bounce-back’ vouchers were handed out, encouraging return cinema visits.

The Festival launched with 40 simultaneous previews of the award-winning climate change documentary, 2040 with a live-streamed Q&A and related activities focussing on the positive changes young people can make to the world. Into Film also partnered with the London Film Festival on exclusive previews of The Aeronauts and Abominable, with filmmaker Q&As and live streams, and closed the Festival with a pupil premiere of Frozen 2.

A continued commitment to ensuring the Festival is accessible to all saw thousands of children and young people with a sensory impairment or who are on the autistic spectrum, given the chance to enjoy a film with their peers. And as a new initiative, The Festival successfully worked with a number of venues on weekend screenings, aimed to bring in teenagers out of school time.

It’s clear that the event is appreciated not just by the children and young people involved, but also their teachers, with Jane Baxter of Dunn Street Primary School, Jarrow, Tyne & Wear commenting:

The festival has been a truly humbling experience for me (I attended with most classes) as, for more than half of the children in the school, this was their first experience of attending a big screen event. I was moved to tears at comments such as “this has been the best day of my life”. None of this would have been possible without Into Film.

Find out more about the Into Film Festival here.