Three leading figures from the UK cinema sector were last week recognised at the CineEurope 2019 Gold Awards for their outstanding contribution to the European cinema industry. 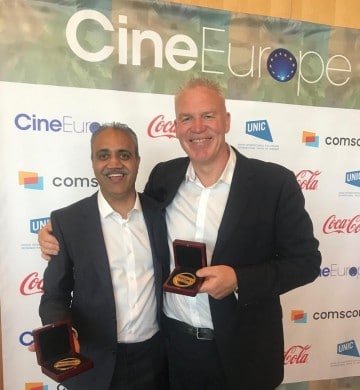 The Awards, introduced for the first time last year, recognise those who in the opinion of their industry colleagues have made an exceptional contribution to the industry, albeit in roles which do not always attract the recognition they deserve.

Amongst those honoured at last week’s awards ceremony at CineEurope in Barcelona were:

Commenting on the Awards, which he presented on the day, UK Cinema Association Chief Executive Phil Clapp said:

“Duncan, Kam and Simon have each made an exceptional contribution to our industry over a number of years, and are respected and admired by colleagues not only within in their own organisations, but also by their peers across the wider sector.
I am delighted that we have had a chance to recognise in some small way their extraordinary work.”

The Press Notice announcing all the recipients of the CineEurope 2019 Gold Awards is here.